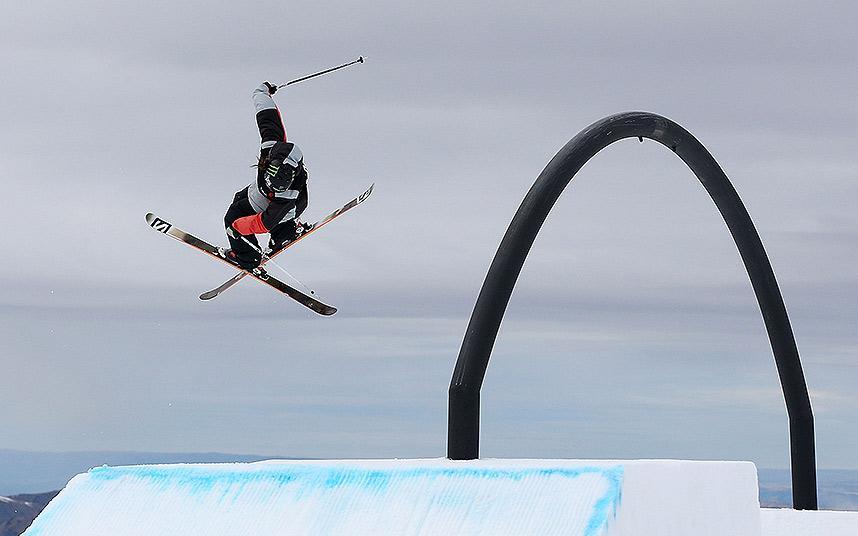 The combination of rail sections and kicker-style jumps makes ski slopestyle the perfect discipline for UK riders brought up on dry slopes and indoor snow. Slopestyle is judged on a combination of amplitude (height), difficulty, execution, flow, variety, and progression.

Added points are awarded if a skier spins in the direction which they consider to be unnatural, and takes off or lands switch (backwards).

Ski slopestyle first developed as a sport when Salomon brought out their first twintip skis, the 1080 in 1997. At the time halfpipes and terrain parks were the preserve of snowboarders, and freestyle skiing consisted of the classic events – moguls, aerials and ballet. The twintip revolution changed all of that and in 2002 American skier Tanner Hall won the first ever ski slopestyle event at the X Games.

Ski slopestyle was introduced into the Olympic programme at Sochi 2014, the same time as snowboard slopestyle, and the two disciplines take place on an almost identical course, made up of rails and jumps.

The objective in ski slopestyle is to produce a run that makes best use of all the features and jumps, producing technically difficult tricks that link together.

Five judges mark each run on trick difficulty, execution (including landings) and amplitude (height). They score on a 10 point scale to one decimal point, with the highest and lowest score dropped from the total.

Off-Axis: The big difference between the old school discipline of aerials and slopestyle is that the spins and flips are performed in a compact, crouched position and off axis, ie on an axis that’s neither horizontal nor vertical.

Leftside and Rightside: Describes which direction a skier spins off a jump or onto a jib feature. It’s important to show the judges a good variation in the direction of spins.

Switch: When the skier is going backwards. A switch trick means that the rider has taken off, rather than landed, backwards.

Spins: Are measured in degrees of rotation – 180, 360 etc, with the numbers often shortened to just the first digits. When spinning on to boxes or rails, skiers spin through 90 degrees less, because the skis travel sideways down the rail, eg 450 on 270 off.

Corked spins: Off axis spins that orientate the skier sideways or partially upside down in the air, with their head and shoulders dropped below the level of their feet. Eg, in a triple cork 1440 the skier performs four full rotations and is upside down three times.

Nose butter: Skidding the tips of the skis across the lip of the jump on take off.

Grabs: Where skiers take hold of the skis and which hand is used dictates the type of grab. Common names include Japan, mute, safety and tail.