Trending
GOULDSTYLE
You are at:Home»Tidbits»Mikhail Gorbachev: The man who lost an empire – BBC News 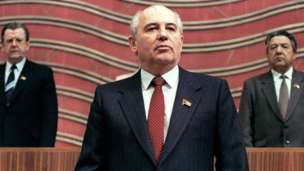 Ex-Soviet leader Mikhail Gorbachev tells the BBC the 1991 deal to kill off the USSR was a “crime”.

Former Soviet leader Mikhail Gorbachev has accused the West of “provoking Russia” and said the USSR collapsed in 1991 because of “treachery”.

The BBC’s Steve Rosenberg in Moscow was given a rare interview with him, 25 years after the USSR’s demise.

Mikhail Gorbachev, 85, has been having health problems. But his sense of humour is indestructible.

When we meet he points to his walking stick. “Look”, he says, “now I need three legs to get around!”

Mr Gorbachev agreed to talk to me about the moment the world changed: the day the Soviet superpower fell apart.

“What happened to the USSR was my drama,” he tells me. “And a drama for everyone who lived in the Soviet Union.”